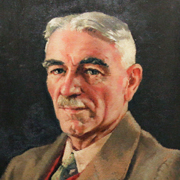 Hardworking in life and selfless in death, John Edgar McAllister left a legacy that has helped thousands of University of Toronto engineering students follow their dreams.

Born in 1870, John Edgar McAllister received one of the few scholarships available at the time from the University of Toronto, an award that allowed him to earn a diploma in civil engineering in 1892 and a degree in 1895.

After attending the Michigan Mining School (now Michigan Technological University) one year later, his first assignment was in the Okanagan region of British Columbia, where he and his wife lived in a tent for a year. Eventually, his experience grew to where he established a consultancy business. It thrived and he established offices in Toronto and New York, and overcame a major setback during the Great Depression in the 1930s.

Before he passed away in 1959, John Edgar McAllister helped ensure that thousands of university students would enjoy the same critical support that he had received. He directed that the majority of his foundation’s resources be used to help engineering students in need at the University of Toronto’s Faculty of Applied Science & Engineering and Michigan Technological University. He also provided for the funding of research in specified engineering programs, subject to the discretion of his trustees.

In the more than 55 years since his death, the McAllister Foundation has grown considerably through careful management and investment by its trustees. It continues to help engineering students to realize their academic and professional potential through his financial assistance. The John Edgar McAllister Foundation awards program in the Faculty of Applied Science & Engineering is a notable example of the impact of Mr. McAllister’s generosity.

It was John Edgar McAllister’s wish that “.…students will be assisted who are not necessarily of scholarship material and who might not, without financial assistance, be able to enter or complete engineering studies. I expect that students of such character can become the future builders of Canada and can help supply its great need for technically qualified engineers. It is my hope that the students who are the recipients of such income will repay the same when they are financially able to do so.”