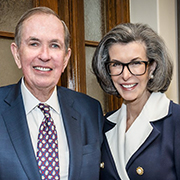 The grandchildren of the late David Alexander Dunlap and Jessie Donalda Dunlap (Hon LLD 1935) have preserved the family’s legacy of support for astronomy at the University of Toronto.

When the Dunlap Institute for Astronomy & Astrophysics was launched in 2008, it was yet another instance of the Dunlap family playing a leading role in making the University of Toronto an international centre for astronomy.

The legacy began with David A. Dunlap (1863﻿-﻿1924), a lawyer, mining entrepreneur, philanthropist and amateur astronomy enthusiast. He met U of T physics professor A.C. Chant after attending one of Chant’s lectures and was intrigued by the professor’s goal of building a major astronomical observatory in Toronto.

Although Dunlap died before this vision could be realized, his widow Jessie Donalda Dunlap (1867﻿-﻿1946), donated funds in 1930 for the purchase of 76 hectares in Richmond Hill and construction of a 19﻿-﻿metre dome with a 188﻿-﻿centimetre telescope—the second largest in the world at the time. The David Dunlap Observatory opened in 1935 and was at the forefront of Canadian astronomical research for decades.

The next major gift commitment came from the Dunlaps’ grandchildren, David M. Dunlap (BASc 1961, Hon LLD 2011), J. Moffat Dunlap (Hon LLD 2011) and Donalda Dunlap Robarts. By the early 2000s, astronomical research at U of T had shifted to newer, larger facilities built by multi-institutional partnerships, and light pollution at the Observatory had increased from nearby Richmond Hill.

The Dunlap heirs agreed to the sale of the land, and pledged the largest share of the proceeds to endow the Dunlap Institute for Astronomy & Astrophysics. In 2008, the Dunlap family was recognized for a gift of nearly $26 million to create the Dunlap Endowment, which supports the ongoing work of the institute and its faculty, postdocs, students and staff.

Through its ongoing commitment to the University of Toronto, the Dunlap family has helped secure the University’s place at the forefront of astronomy and astrophysics with particular strengths in radio astronomy and the study of pulsars and magnetism.