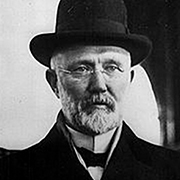 As one of Canada’s most influential business leaders, Sir Joseph Flavelle used his skills and connections to advance philanthropic causes and help shepherd the University of Toronto into the 20th century.

Born into modest circumstances, Sir Joseph Flavelle (1858-1939) rose to become one of Canada’s most respected business leaders, serving as president of the William Davies Company, at one time the largest pork producer in the British empire. His success at Canada’s original meat packaging firm (now Maple Leaf Foods) led to a prominent career in finance and commerce as chair of the Bank of Commerce, the National Trust Company, and Simpsons Limited. By the dawn of the 20th century, he was one of the most influential men in Canada.

Later in life, Flavelle channelled his success in business towards charitable causes and public service, making significant contributions to the Methodist Church and Toronto General Hospital. During the First World War, he overhauled the Imperial Munitions Board, transforming it into a model of efficiency at a critical point in Canadian history.

His other enduring contribution is Flavelle House, his former residence at 78 Queen’s Park. An iconic part of the Faculty of Law, the handsome 1902 heritage building features one of Toronto’s best-preserved examples of the beaux-arts style in the four angels that adorn the ceiling of its main foyer.

As both a significant donor and the chair of a milestone provincial commission, Sir Joseph Flavelle’s impact on U of T cannot be understated. His vision for what U of T could become and his unwavering commitment proved instrumental in transforming U of T into the vibrant and diverse institution it is today.