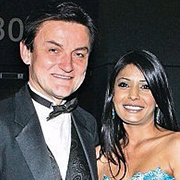 George and Rayla Myhal’s visionary support is helping to position University of Toronto among the global leaders for innovation in engineering education and research.

George Myhal arrived in Canada from Ukraine in 1958, accompanying his machinist father and his mother, a nurse, as well as his brother Daniel (BASc 1977, MBA 1984). Inheriting his father’s aptitude for mechanics, Myhal studied industrial engineering at U of T before launching a career in finance. He played a key role in building Brookfield Asset Management into a global success and served as president and CEO of Partners Value Investments LP.

Myhal has been generous in sharing his success with others in the community. Together with his wife, Rayla Myhal, he has supported important institutions in the fields of health care, culture, and social services as well as causes that support the Ukrainian﻿-﻿Canadian community.

The couple have been particularly generous to U of T. Between personal giving and contributions from the Myhal Family Foundation, their philanthropy totals over $10 million, highlighted by the transformative gift that made possible the Myhal Centre for Engineering Innovation & Entrepreneurship. The cutting﻿-﻿edge Myhal Centre establishes a new standard for engineering education and research, positioning the Faculty of Applied Science & Engineering among the most innovative in the world.

The Myhals are playing a leadership role in helping educate the 21st﻿-﻿century engineers who are driving innovation across industry, government, academia and many other fields, to the benefit of the University, Canada and the world.