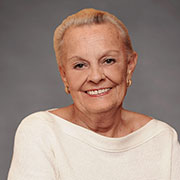 Through many years of generous philanthropy, Ted and Loretta Rogers have greatly enhanced engineering scholarship at U of T and supported thousands of students.

Edward (Ted) S. Rogers (1933-2008) was a Canadian broadcasting pioneer who, over a 48-year career of 18-hour workdays and shrewd deal making, transformed a single Toronto radio station into the telecommunications giant Rogers Communications. The company is a major employer across the country with media and entertainment properties—from broadcast media to lifestyle magazines to professional sports teams—that are a part of the daily fabric of Canadian life.

In 2000, they gave $25 million to establish two research chairs at the University of Toronto—the Edward S. Rogers Sr. Chair in Engineering and the Velma M. Rogers Graham Chair in Engineering—and to endow graduate and undergraduate scholarships, which, to date, have supported close to 2,000 students.

In recognition of this gift, the Faculty of Applied Science & Engineering named the electrical and computer-engineering department in honour of Ted Rogers’ father—Edward S. Rogers Sr.—who was a student in the department from 1919 to 1921.

These remarkable benefactions, which have transformed research and enriched student life, speak to the incredible legacy of Ted and Loretta Rogers at the University of Toronto. They stand alongside the Rogers Foundation’s landmark contribution of $130 million towards the Ted Rogers Centre for Heart Research at U of T, SickKids and UHN in 2014 —the largest private donation in the history of Canadian health care.